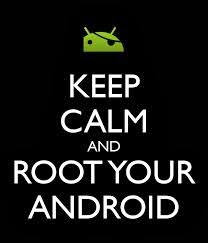 Android is one of the most open, versatile, and customizable mobile operating systems out there. You may think you don’t need to root your phone, but you’d be surprised at how much more you can accomplish with a little work. Here are 10 reasons rooting your phone is worth the hassle.
Now follow my this post you can see how can you root your phone.


Back Up and Restore App Data

The popular Titanium Backup app, which allows you to back up an app’s data and then restore it later, requires root access. Android apps aren’t supposed to be able to read other apps’ data — that’s a security vulnerability — so this still requires root access. Much Android data is automatically backed up, but Titanium Backup allows users to back up everything and easily restore it, even data that wouldn’t normally be backed up.
Android includes some built-in backup features, but they’re hidden — you have to access them by plugging your device into a computer and running a special command. While the built-in backup features are so hidden and not all app data is backed up to the cloud, Titanium Backup is still very useful. 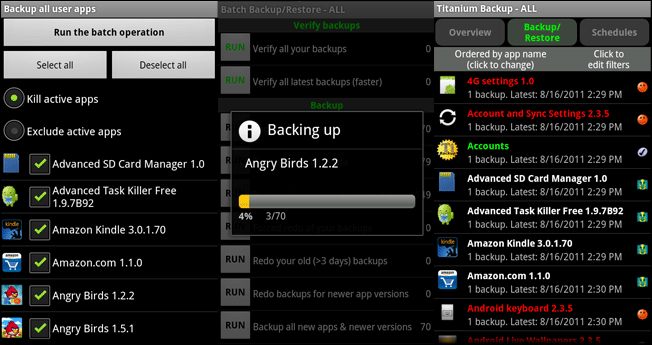 Want to change your Android phone’s DNS server and use a third-party DNS server like Google Public DNS for possibly improved speed, OpenDNS for web filtering, or Tunlr for easy access to geoblocked online media services?
Android doesn’t make this easy. You can change the DNS server for each individual Wi-Fi network you connect to, but you can’t set a preferred DNS server system-wide. This requires a third-party app like SetDNS. Sure, you could just change the DNS server on your router and you’d be okay when you were at home, but this wouldn’t help you when you were out and about. Android make this possible without rooting, but it’s extremely tedious.
Download Link 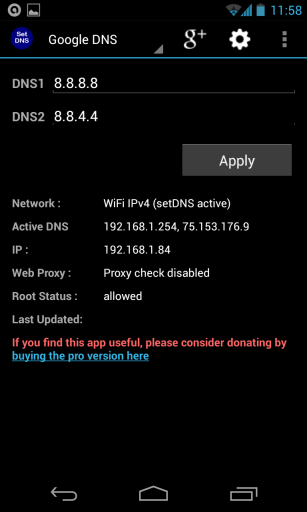 Android now provides a way to disable apps that were preinstalled by the carrier or device’s manufacturer. However, they’ll just be disabled — so they’ll still take up space on the device’s storage. With root access, you can delete the applications from the system partition, recovering the wasted storage and gaining the ability to use it for other things.
This isn’t necessarily recommended, as it can cause problems if you remove apps that the device needs. That’s why disabling bloatware apps is generally a better idea — but that’s little comfort if you don’t have much storage space left and you want to recover space wasted by bloatware.
Download Link 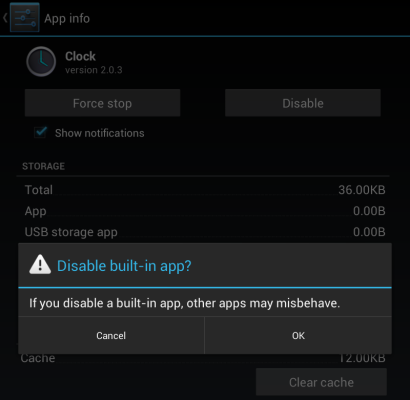 After rooting your device, you can install a custom Linux kernel on it. This enables you to access features that require kernel-level changes. For example, Nexus 4 users can install the Touch Control app to wake their smartphones with a simple swipe on the display rather than a press often power button. This is implemented as a kernel module because it requires that low-level access.
Other commonly used features that often require custom kernels include display calibration, CPU downclocking (for more battery life), and CPU overclocking (for more performance.)
Download Link 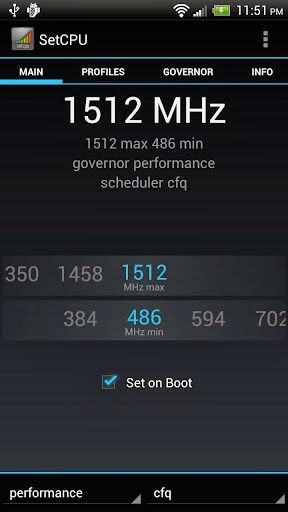 When you install an app, Android shows you the permissions the app requires. This is a take-it-or-leave-it offer — if you want to install a game but that game requires an obscene level of permissions, you can’t just deny individual permissions.
Root access allows you more control over app permissions on your phone, as this feature isn’t available to typical users. The good news is that Android 4.3 includes a hidden permissions manager named “App ops.” This feature likely isn’t stable and shouldn’t be relied on yet, but it’s hopefully a sign of things to come — with any luck, we’ll see a stable permission manager introduced in Android 4.4.
Download Link 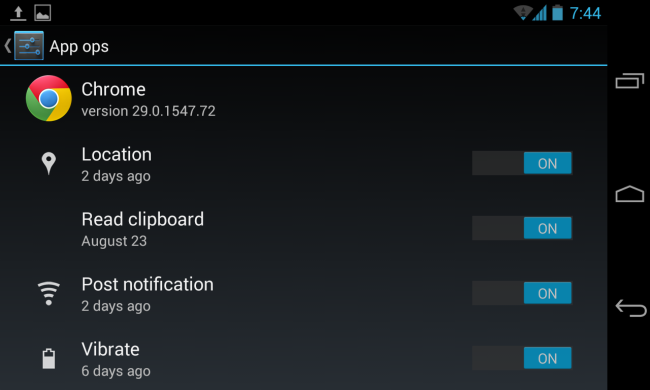 It’s possible to connect a USB stick to your Android tablet using a standard USB OTG cable. However, Android doesn’t support USB sticks natively. If you’d like to connect a USB stick to your tablet so you can watch videos without wasting all your tablet’s storage, you’ll need root access and something like the StickMount app. This utility makes files on USB sticks available on the Android device’s file system so other apps can access them, but it requires low-level access available only to root users.
Download Link

Root gives you full access to the system by definition, so it’s no coincidence that people who want full read/write access to the entire file system will require root. Root allows you to use file managers that can access the entire file system and even edit Android’s configuration files by hand in text editors — something hardcore Android tweakers may find useful.
Download Link 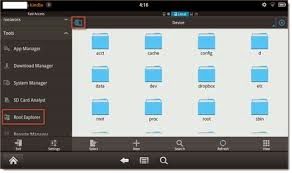 We’re obviously an ad-supported website, so we generally don’t jump up and down telling everyone how to disable ads. However, it’s impossible to deny — one big reason many people root their devices is to block ads at the system level.
Many Android apps are free specifically because they contain ads, so using a trick to disable advertisements in the app when you could just spend $0.99 for the full, ad-free app isn’t very nice to developers. Don’t expect Google to make this feature stop requiring root anytime soon.
Download Link 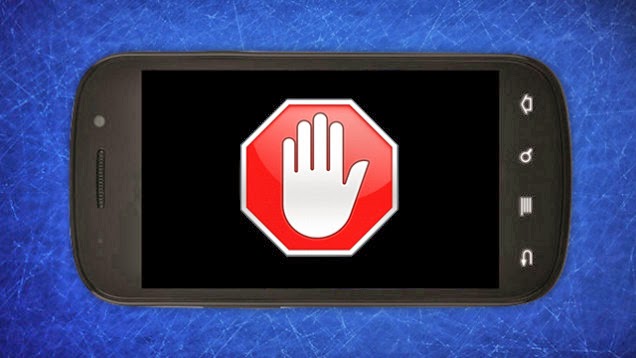 Okay, so you probably already know about this one—but it’s one of the best benefits of rooting. A custom ROM is basically a custom version of Android, and it truly changes how you use your phone. Some merely bring a stock version of Android to non-stock phones, or later versions of Android to phones that don’t have it yet. Some add a few handy features, some add lots of really unique features, and some change your operating system from head to toe. No matter what phone you have—even if it’s a Nexus—we highly recommend checking out the custom ROMs out there. You won’t be disappointed. Note: As some of you have noted, you don’t actually need root access to flash a custom ROM—though you will need to unlock your bootloader (a process that sometimes comes bundled with root access). Still, it requires freeing your device from manufacturer lockdowns, so we’ve kept it in the list despite this technicality!
Download Link 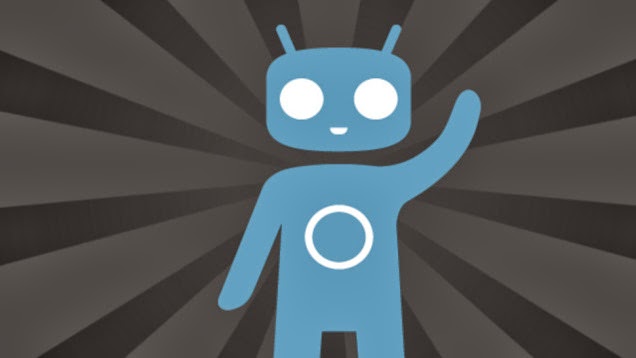 Beyond just customizing your phone’s existing features, rooting helps you pile on all kinds of wonderful new weirdness. You’ll love it.
Want to hook up your PlayStation controller to your phone for better gaming? You can. Want to set rules for callers to decide who can and can’t call you when? Why not. Maybe your carrier has blocked certain apps, or an app isn’t available for the country you live in? There are Market Enabler apps that trick your phone (and Google) into thinking it’s on another carrier or in a far off land. Nervous about connecting to the public Wi-Fi? Wifi Protector will keep you safe from all kinds of ARP, DOS, and MITM attacks. Or, you could put the new Android 4.2 camera on your non-Jellybean phone. Accidentally deleted something you wish you hadn’t? Undelete might just save your bacon. The possibilities are virtually limitless.
You also install Backtrek OS in Android Mobile 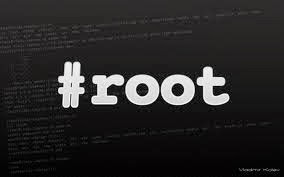