Google replces google talk to Google Hangouts. With Google Hangouts you can make Video Call an one click with on Air .Google Hangouts is an instant messaging and video chat platform developed by Google.
It replaces three messaging products that Google had implemented concurrently within its services, including Talk, Google+ Messenger, and Hangouts, a video chat system present within Google+. Google has also stated that Hangouts is designed to be “the future” of its telephony product, Google Voice, and integrated some of the capabilities of Google Voice into Hangouts


Google+ Hangouts is a free video chat service from Google that enables both one-on-one chats and group chats with up to ten people at a time.   While somewhat similar to Skype, FaceTime and Facebook Video Chat, Google Hangouts focuses more on “face-to-face-to-face” group interaction as opposed to one-on-one video chats, and utilizes sophisticated technology to seamlessly switch the focus to the person currently chatting.

Google Hangouts can be accessed via laptop and desktop computers as well as with Android mobile devices (Android “Gingerbread” v2.3 and later) .  In addition to video chatting, Google Hangouts users can share documents, scratchpads, images and YouTube videos with other users.   Google+ Hangouts also offers a “Hangouts on Air” feature for broadcasting live video conversations that are accessible to anyone with a web browser.

With Hangouts on Android devices, you can send messages and make video calls on multiple devices to multiple people. You can also share photos and your location with others.

Set up a Google account: To use Hangouts on Android devices, you’ll need a Google account. But to use Hangouts on  your computer, you’ll need to sign up for a Google+ account. Then you can use Hangouts with Google+ circles.
Use with multiple devices: Hangouts are synced automatically across devices, so you can start a Hangout on your Android device and continue on another, like your computer. Remember, you need a Google+ account to use Hangouts on other devices.
Send SMS and Hangouts messages: You can start a Hangout with just one person or multiple people. If someone is unavailable, the person will see the message when he or she returns. You can also send text messages using Hangoutsand your cellphone number.

One touch to see the whole family

With one touch, you can start a video call with one friend or a whole bunch. Video calls ring everywhere your friends have Hangouts. Whether they’re on their computer, phone or tablet, they’ll know you’re calling. If they’re not around or can’t pick up, Hangouts will let them know you were trying to reach them.
Make video calls: Have face-to-face conversations with 9 other people using video calls from Hangouts. It’s easy to invite specific friends or circles. If someone is unavailable, Hangouts will send a missed call notification.
You can also make phone calls from your computer or the Hangouts app on iOS devices. But you can’t make a phone call using the Hangouts app on your Android device.

Google+ Hangouts is a messaging app that lets you send and receive messages, photos and videos, and even start free video calls — one-on-one or with a group!
● Send and receive both Hangouts and text messages (SMS/MMS) and easily switch between message types.
● Include all your friends with group Hangouts and MMS conversations.
● Say more with photos, emoji, and animated GIFs.
● Turn any conversation into a free group video call with up to 10 friends.
● Use Hangouts to connect with friends on computers, Android and Apple devices.
● Easily share Maps locations and People contacts with your friends.
● Message friends anytime, even if they’re not connected right now.
Notes:
● Unlike Google Talk, Hangouts does not support “invisible” status. 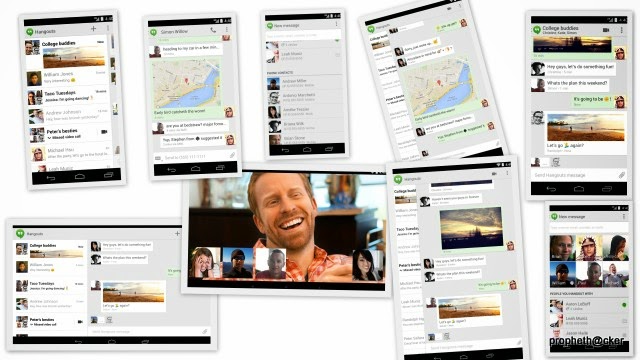 Top 5 Apps from Google Can make your Android Better