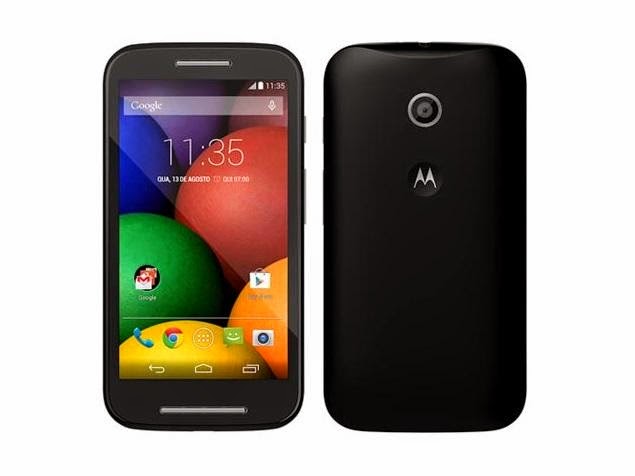 Motorola has announced the Motorola Moto E, the latest device in its drive to put a smartphon
e into the hands of everyone. It aims to give you a great smartphone experience without costing a packet.This is best Best Cheapest Smartphones ever.This phones has loaded latest android latest Kitkat OS.

In the hand, the Motorola Moto E doesn’t feel like a budget device. It is finished in plastics, like the Moto G, but feels solid. There are no creaks, it doesn’t feel like a hollow shell, and that makes it feel much nicer to use than many cheap rivals.
The design follows that of the Moto X and the Moto G, with a nice curved back that fits nicely into the hand, but as this is a fairly small device, gripping it is no problem. It measures 124.8 x 64.8 x 12.3mm and weighs 142g, heavier than you might expect.
Perhaps the biggest indicator of its budget status is the 4.3-inch display with a 960 x 540 pixel resolution. That’s 256ppi, and while that might make the Moto E the highest resolution in its class, you do get a slightly grainy display, albeit one that’s protected with Corning Gorilla Glass 3. That’s acceptable at this price, as there’s plenty of punch from colours, even if the viewing angles are a little limited, from what we saw. 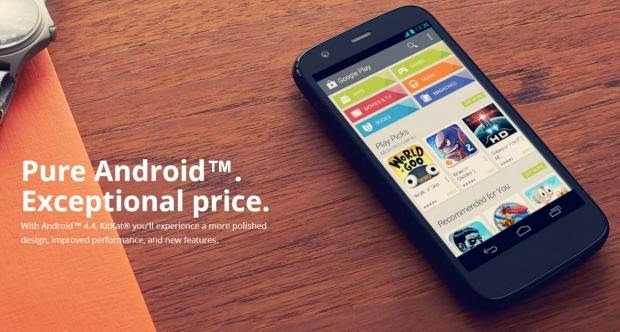 Under the hood is a dual-core Qualcomm Snapdragon 200 chipset clocked at 1.2GHz and 1GB of RAM. In the brief time we had to play with the Moto E it’s difficult to draw any definitive conclusions about the performance, but it seemed responsive enough.
There’s only 4GB of internal storage, which is a little on the low side, especially when it comes to installing apps. There is a microSD card slot, supporting up to 32GB, so you’ll have plenty of storage space for music and photos. 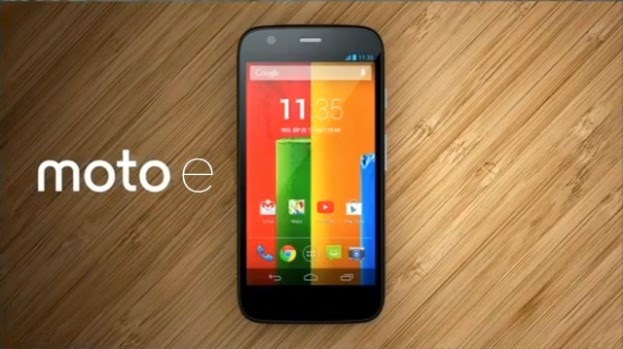 That’s helped in part by the reletively unfettered Android 4.4 KitKat operating system. Motorola, as with previous devices, isn’t pouring its efforts into adding clutter to the OS, instead offering Android pretty much as Google intended, as well as promising a timely update to the next version when that time comes.
There is some customisation, of course, with Motorola making changes to the camera app, and adding in features such as Moto Migrate to help you move content to your new device, as well as a new feature called Alert Me. This is a location-based app that will let you tell a friend where you are and send emergency distress messages and so on.
There’s a 5-megapixel camera on the rear of the Moto E, but there’s no flash. There’s also no front-facing camera, so you won’t be making any video calls from this affordable handset. Or taking selfies. Video capture is also limited to 854 x 480 pixels, a far cry from the HD quality we’ve come to expect from phones.
There’s a 1,980mAh battery under the skin that’s not user-changeable. Motorola is promising all-day performance from it, but we’ll have to see how well it lasts when we get the phone in for a full review.
First impressions of the Motorola Moto E are good: it feels like a solid device and that’s important, because it avoids the normally plasticky finish that often plagues devices at this price point. It will be available in black or white, with a range of coloured shells to let you customise the phone to your liking.
He is very popular in market so he got out of stock in flipkart. 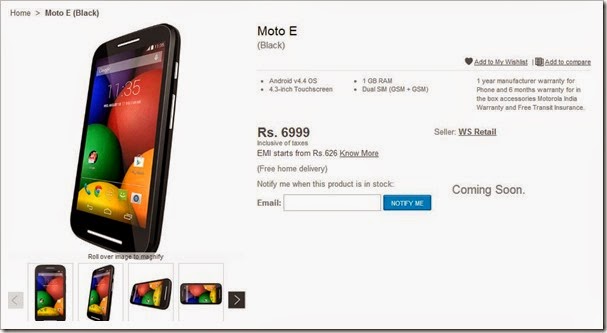